Posted by Tommy Eriksson on februari 1, 2010
Posted in: Blandat. Leave a Comment

It is finally time to show the LEGO excavator i built last year. Since this post will be linked from youtube i am writing it in English even though the rest of the blog is Swedish. I started working on it summer or fall 2008 but i wasn’t feeling too good at the time due to work and also because of previous failed models . I really wanted it to be special and have lots of functions but i kept running into trouble, mostly with the limits of the material i was using.

I wrote about a much larger model back in 2008 i believe but it was way to large to be built in LEGO. Yesterday i read Technicbricks for the first time in several months and came across 2 interesting posts on the subject of large models. The first was this about aluminum liftarms. Now that is something i could have needed when i finished this back in mars 2009. Of course those weigh a lot and so one would need some actuators that could lift them. Like these. If only my economy would allow me to get some of those. It would have made a huge difference. Oh well back to my model. 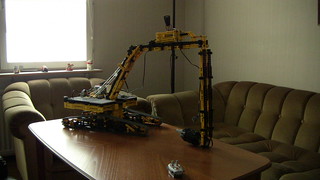 As you can see it is really large. The boom extends some 50 cm from the main body or about 30 cm from the front of the tracks. Fully extended it would be about 10 cm more. The dipper is 45 cm long. Track length is 49 cm and the width is 25 cm. The weigh is 3,2 kg.

The model as 6 motors and they are:

All together a total of 4 Power Function to 9V converter cables were used. One for the motor that controlled the dipper, one for the 9V motor and 2 for the drill motor that needed a 9V extension cable. There were no PF extender cables when i built this model. And now for more pictures.

Here is the cylinder that controls the dipper. There is nothing special about it, just a rack and pinion system with some linkages to get the dipper movement right. 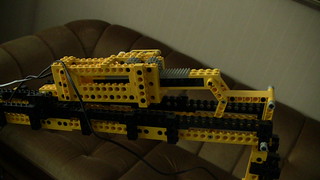 This is and alternate view showing the motor and gearing. I used a slip gear to avoid breaking anything when the cylinder reached the end of travel. This however does cause it to not extend fully at times which can be noticed in the movie below. This is also a lot heavier than i would like it to be, but i don’t know how to get the desired functions any other way. 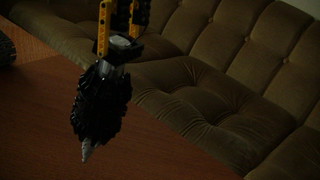 The drill can swivel on its own since i didn’t get to build any cylinders to control it. I wanted to have a bucket here but realized that there would be too much weight at the end which the arm would not be able to lift. I then remembered seeing excavators with drills on them so i figured that it would be a nice comprise. It is built using the ”tires” from the Powerminers Thunder Driller what i bought just for this. It looks really nice but i don’t know how well it would drill. 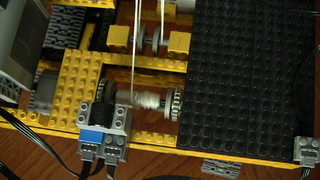 The picture shows the mechanism the lifts the boom. There isn’t much gearing involved, just a 8T gear on the motor axle that drives the 24T gear on the hoist axle. Due to the string the speed is acceptable and it has enough strength to lift everything. I tried using cylinders similar to the ones that moves the dipper but they just could not handle the weight. I recall seeing a system like this on a real model and even if there isn’t any i still had to use it. The string loops twice around an unseen axle on the boom then it is fastened on the boom. This is probably the strongest point in the model and for good reason. 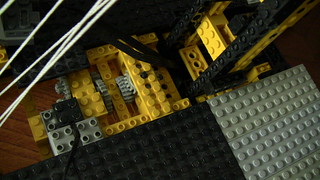 No excavator can work if it can’t rotate its super structure and this motor takes care of that. Due to the low speed needed the only motor that would work is an 9V gear motor. As far as things that actually made it into the finished model, nothing went through more revisions than this system with the tracks coming on  second place. I never thought i would get the movement slow enough with the space i had and it still is a bit to fast for my liking but i didn’t want to spend more time with it.

The crown gear to the right sits on the same axle as another 8T gear which in turn drives another gear. This gear’s axle goes way deep into the base and there there is another 8T gear the interacts with the turntable. Needless to say that is one gear i really don’t want to brake. And braking it is mostly just about rotating the superstructure by hand. Luckily all those gears gives it a lot of play so i never broke it and soon it wont matter 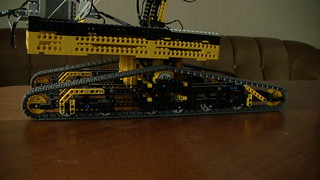 Lastly we have the tracks. Unlike my last excavator that failed due to me not being able to build a strong enough base, this time i really wanted to make a strong base. Also i used tracks instead of wheels so i didn’t need any stabilizers. As evident in the movie they tend to jerk a lot. I don’t know why, perhaps due to the gearing involved and the fact that the tracks are sitting very tightly. But since there is no driver cabin on the model there is no need to worry about ergonomics. The motors are hidden in the base and i could not get a good view of them so i didn’t take any pictures. The gear sitting in front of the top sprocket is for spacing only, it does not engage any other gear. The fact that i needed something wider than a bush shows just what kind of loads i was expecting.

Even though i wanted it to be my crown achievement i can’t say that it is. Sure it has some functions but they barely work and functions is all the model has. then again my talent has never been in the design apartment, i tend to focus and manage just function and not all the other bits and pieces that a model needs to look good.  You could say that it represents my mental health at the time and i  knew that if i ever was to feel like a LEGO builder i had to finish the model no matter what and not care about looks, just functions.

Here is a video showing the various functions. Enjoy!

So what future plans do i have?. Well currently i have taken an interest in Warhammer 40K even though most models are still on their spruces. A sprue for those that don’t know is parts of the mold that form resin models. Here is a good picture of spruces . But i do have some ideas for combining 40K with LEGO. As long as one plays by the rules there as much freedom as for what material one uses in building models, at least for some specialty models.

I have noticed that both me and the Orks share a common view on how do build machines, function over looks, so i will try to build a Stompa since not only can i use it in play once my army is big enough, the very design screams LEGO a long way. The ones in the pictures has a powersaw and some large weapon i don’t recognize. My plan  is to make the right arm pneumatically controlled and then put either a powersaw or powerclaw on it. I would prefer the claw for looks but i don’t know which would make for best play. The other arm would be some sort of shooting weapon though i need to find more info on just what kinds of weapon this can have before i choose. Of course the model will walk and i have some ideas for that as well but i need to test it first.

So what do you think?